Traders Point Christian Church employees used to have a peculiar weekly tradition: replace burned out fluorescent light bulbs and fixtures. Then a 2013 expansion highlighted an alternative to save time and money. 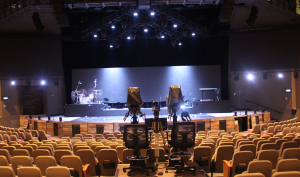 “Every Friday before service on the weekend, I had one guy do nothing but change bulbs and ballasts,” said Rob Nance, property director for Traders Point Christian Church in Whitestown, Ind. “We also always had to keep inventory on hand. Reviewing those records, it was very apparent that we had to go in a different direction.”

Boone REMC worked with church employees to plan for the LED retrofits; administrative offices, a gymnasium, café, and stage in the 2,600-seat auditorium were among the areas that received the lighting upgrades.

“To work with our REMC is easy,” Nance said. “They always have a lot of information. They put a lot of emphasis on customer care, and I can tell that through everyone I’ve dealt with.”

Nance even has contact information for Boone REMC staff members on his cell phone, and he calls them directly with questions or when the need arises.

“As a local electric cooperative, we pride ourselves on being approachable and working directly with the organizations we serve,” said Bill Conley, president and CEO of Boone REMC. “When our members contact our co-op, they are talking directly to us and can reach us anytime to have their needs addressed quickly so they can remain focused on business.” 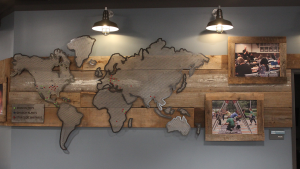 The LED upgrades helped lower Traders Point’s energy costs by nearly $3,000 per month, Nance said. After the upgrades, the church also saved indirectly in employee costs, Nance added, as they do not have to change out lighting nearly as frequently as before.

The project had a three-year payback with the savings and the Power Moves rebate. The church redirected the monthly savings toward other projects and future planning, Nance said. Traders Point has plans to build two more permanent locations near Indianapolis, and launch two additional sites.

“We rely solely on the giving of our congregation and our members, so we have to steward that money well and take care of the gifts that we receive,” Nance said. “Anything we save from everything we’ve done keeps our overall mission moving forward in a good direction.”