In cold weather, not (EV)ery mile is equal

Part I – The Departure

(This is the first of a two-part post on the Power Moves Tesla’s inaugural trip from Indianapolis to Perryville, Missouri. You also can read Part II: The Arrival – and Return.)

Two Power Moves team members and I recently took a 600-mile roundtrip in our new 2019 Tesla Model 3 Long Range (M3LR). (Did you know? Wabash Valley Power is an Indianapolis-based generation and transmission cooperative that generates and transmits electricity to 23 Midwestern co-ops. We partner with our member co-ops on the Power Moves programs.) On the trip, we traveled from our Indianapolis office to our member co-op in Missouri to inspect several Power Moves® business projects. It was our first long trip in the Tesla and we were eager to see how it performed.

Planning for Day One

Although the stated top range of an M3LR is about 300 miles, and our destination about 300 miles away we knew we’d need to stop to charge at least once on the way there and again on our return. To maximize our distance, we set the battery to charge to 100 percent at our office’s Level 2 charger the night before leaving.  (Did you know? These batteries prefer to not charge to 100 percent every time. We normally charge only to 80 percent.) Our planned stop was at the Tesla Supercharger in Mount Vernon, Ill., before reaching our destination of Perryville, Mo. Leaving Indianapolis, we had 306 miles of range and set the navigation for Mount Vernon, a distance of 213 miles.

An hour after leaving, the car was telling us not to drive over 70 mph to reach our destination. Several minutes later, it suggested a top speed of 65 mph. Realizing that this speed was not practical while driving on Interstate-70, we selected the Tesla Supercharger in Effingham, Ill. as our new destination. (Had we been patient, the car would have recalculated for us and suggested a stop in Effingham.) 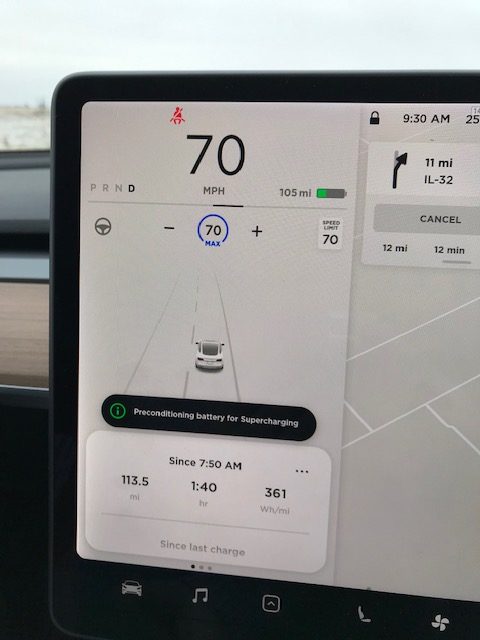 We pulled into the Supercharger in Effingham, 145 miles from our office with a range of about 90 miles left. “Wait a minute,” you might be thinking. “Why did you have only 90 miles of range left? The math (which should be306 miles of range – 145 miles driven = 161 remaining) doesn’t add up.” Because it was cold (24 degrees Fahrenheit with a headwind) and the Lithium-Ion batteries that power EVs do not operate optimally in cold weather. Our 145-mile distance used the battery power needed to drive 216 miles in ideal weather conditions. Put another way, for every mile we drove we used the same battery power as 1.49 miles of range in ideal weather conditions. One mile of range was used to move the car, with another .49 mile of range to keep the riders and batteries comfortably warm. #Learning

The car suggested that we needed only 10 minutes of Supercharging to get the battery power needed to reach Mount Vernon, Ill., which was 66.5 miles away. We left the charger in Effingham with 158 miles of range and felt confident. Our plan was to fully charge at the next charger – a Tesla Supercharger – and eat lunch.

An hour later, we pulled into the Supercharger in Mount Vernon with 53 miles left. This new math should have been: 158 miles range – 53 miles driven = 105 miles of range left. It was still cold and we were still driving into a strong wind. For every mile we drove, we used the battery power needed to drive 1.58 miles in ideal weather conditions. An hour after arriving, we had fully charged to 306 miles of range (yay Tesla Superchargers!), had eaten lunch, and were ready to continue to Perryville, Mo. We fully charged because there are no EV chargers in Perryville; the nearest Supercharger is the one in Mount Vernon, Ill. (about 85 miles away), and the nearest DC FC charger is in Festus, Ill., about 50 miles away. Therefore, we needed to charge enough at this stop in order to travel at least 50 miles the next day to “fill up” again.

Click here for Part II: The Arrival – and Return.