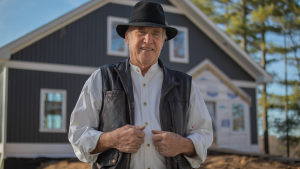 To make his planned home a reality, Acheson turned to some old friends – and his new electric cooperative.

Acheson is completing his family’s new home on Fish Lake in LaGrange County, Ind., which is served by LaGrange County REMC. His new house qualifies as a Power Moves Home®, which uses on average at least 20 percent less electricity than a newly constructed home and is 79 percent more efficient than a resold house. Acheson implemented several unique energy efficient elements into the home’s construction, including insulated concrete forms (ICF) for the walls and a closed loop geothermal system to heat and cool the house. The insulated concrete forms, which provide superior air sealing and thicker insulation than traditional building methods, was done in collaboration with a friend of Acheson who had worked for him before starting his own business. 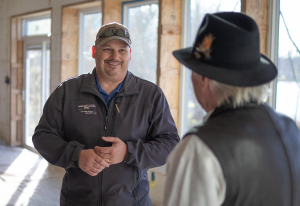 “It was only 10 percent more than if we had framed a year ago, back when the cost of wood was skyrocketing,” said Acheson, who first worked with ICF construction when building a new garage. “The whole idea was let’s save some money and let’s experiment at the same time.”

The ICF system is comprised of blocks that can be “formed” over several days, less time than traditional framing processes. ICF blocks are made from a foam exterior with rebar on the inside, which then has concrete poured inside. The concrete dries and the blocks together form the exterior structure walls. An ICF system is much more energy efficient than traditional framing and insulation, leading to lower energy costs to heat and cool a building. 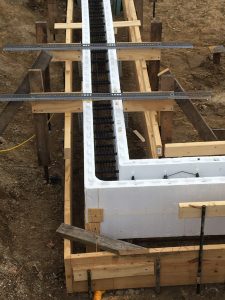 A close-up of the insulated concrete form (ICF) blocks comprised of foam and rebar before the concrete is poured. ICF is more energy efficient than traditional framing and insulation.

Acheson owned an Indianapolis-based residential and light commercial construction company for 48 years before retiring a few years ago. Several of his former employees traveled to northern Indiana to install wiring and do plumbing work on his new home, which includes four bedrooms along with three full bathrooms and two half-bathrooms.

Acheson and his wife bought a parcel and are building the home on the same lake where Archeson’s two sisters-in-law and numerous additional family members live. The Achesons made a tradition taking their children up to the lake for summer vacations; Independence Day celebrations can feature more than 40 family members gathering.

“We brought our kids here growing up, and now they all love coming up here,” said Acheson, who takes his family out on a boat for nightly summer cruises on the lake. “They enjoy the Fourth of July in particular.”

When he had trouble finding contractors, Acheson received recommendations from Jake Taylor, the energy advisor at LaGrange County REMC. When Acheson contacted the electric co-op for service to the house, Taylor informed him about the Power Moves Home program. 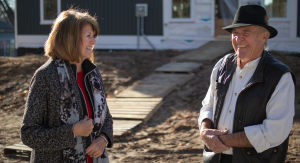 Clare Acheson, left, and Don outside their home being built in LaGrange County, Ind. The Achesons live in Indianapolis and took their kids to the lake every summer to visit family who live nearby.

As part of the Power Moves Home program, Acheson will have a Home Energy Rating System® rater provide a full energy-efficiency report on his home. The Power Moves Home certification also includes a heating and cooling cost guarantee.

Taylor also informed Acheson that he could receive a Power Moves® rebate for the new geothermal system, which uses a heat exchanger and the mild underground temperatures to heat and cool a building more efficiently than other equipment.

“Don already had this thing designed as a Power Moves Home, and he didn’t even know it,” Taylor said. “This was a slam dunk.”

Taylor and Acheson have occasionally discussed the home as construction continues. Taylor has even created several videos for LaGrange County REMC’s YouTube channel highlighting some of the building methods incorporated into the new home. 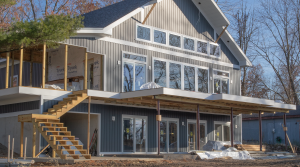 The home of Don and Clare Acheson that is being built on Fish Lake in LaGrange County, Ind.

“In all my years in being a contractor and energy advisor, I see maybe 25 percent of my homes integrated with something like he is doing,” Taylor said. “Most of the time people want to build with traditional methods, and that’s it.”

Acheson has even done some of the work himself. He is installing the geothermal system, and he already completed the ductwork throughout the multi-level home. It’s an example of the kind of unique custom work that his contracting company typically performed in Central Indiana.