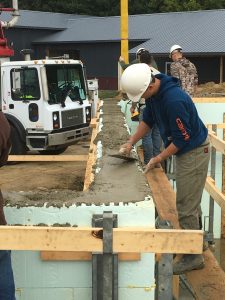 One of the program participants works on the concrete as part of the insulating concrete forms.

Hawk helped the students set forms and pour a basement using insulated concrete forms (ICF). ICF blocks are made from a foam exterior with rebar placed on the inside, which has connective plastic webs, before concrete is poured in between. The concrete dries and the blocks together form the exterior structure walls. While ICF has existed for decades, it has gained attention in recent years from people building more energy efficient structures. Also, as lumber prices skyrocketed during the COVID-19 pandemic, some people have considered ICF as an alternative to traditional framing.

“They are a lot more versatile than what contractors are willing to find out,” said Hawk, who worked with a vocational program in Noble County to pour the concrete into the ICF forms. “That’s probably why I geek out so much over them. If a high school team can put it together, why aren’t more experienced contractors doing this?”

By combining a foam exterior with concrete, ICF has a more consistent – and frequently higher – R-value than traditional framing, which can allow for more heat transfer than ICF (the greater the R-value, the greater ability to keep conditioned air where you want it). ICF’s R-value can mean lower costs to heat and cool the home while keeping occupants comfortable during extreme weather.

“It has definitely gained more attention,” Hawk said of ICF. “More and more homeowners are demanding efficiency when they build a new home.”

The ICF system is comprised of blocks that can be “formed” over several days – less time than traditional framing processes. The concrete walls also will not have the same moisture issues as wood framing, which can lead to a more resilient structure that will last for decades, Hawk said.

He has seen several homes built with ICF, including one in Northeast Indiana as part of the Power Moves Home program. Homes in the program are at least 20 percent more efficient than traditional homes, and come with an energy efficiency report and HERS score, as well as a heating and cooling cost guarantee.

“We have seen multiple ICF homes in the last few years,” said Dan Phillips, senior analyst of grid innovation and energy efficiency at Wabash Valley Power Alliance, which administers the Power Moves Home program. “The advantages that ICF brings make it very appealing, and new homeowners incorporating ICF into their new homes have been pleased with the results.”