Every time Kim Flowers answers a ringing phone, it could be reaching for a riddle: maybe a brief question with an easy answer, or a mystery that requires serious sleuthing.

The more puzzling, the more pleasant! After all, she’s been putting pieces together for most of her adult life. 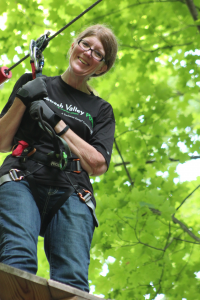 Flowers, the residential energy efficiency coordinator for Wabash Valley Power Alliance, processes Power Moves® residential rebates submitted by homeowners served by WVPA’s 23 member electric distribution cooperatives in Indiana, Illinois and Missouri. She also routinely receives a wide range of inquiries – her phone number listed on PowerMoves.com goes directly to her desk, and she answers it herself. Questions asked range from shopping for qualifying appliances and systems to chasing down an application’s status.

“I absolutely love connecting with people, and I love to solve problems,” Flowers said. “For me, there are no greater people than co-op people. That’s why I enjoy it.”

A mother of five adults (and now with five grandchildren), Flowers early on had to quickly solve problems. She worked in the evening and overnight around her children’s schedules. She cleaned airplanes and even worked at a big-box store assembling and taking down aisle displays. 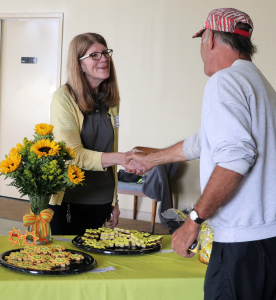 Kim Flowers greets an attendee at a dedication for Co-op Solar, the community solar program created by Wabash Valley Power Alliance and its member co-ops.

The physical demand of climbing ladders and hauling heavy boxes for 10 to 12 hours each shift took its toll. As her children got older, Flowers began to consider alternatives. That’s when she asked her long-time friend if there were any openings where her friend worked: Wabash Valley Power Alliance.

Flowers has worked in several positions at WVPA, including as a receptionist for more than 8 years and in WVPA’s records center. In 2016, a position opened on the Power Moves team, and she was a good fit to support co-op members processing residential rebates.

“People call in all the time, often just with general questions,” Flowers said. “Some will have questions about information about the application. Sometimes people know they have a furnace but don’t know what kind they have, for instance. There is usually some learning that goes on for people as part of the application process.”

She has learned about energy efficiency while working with the Power Moves applications. She was intrigued by triple pane tilt-turn windows and an induction stovetop that was demonstrated while touring an energy efficient home. She’s even had insulation added to her home. 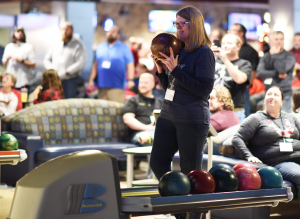 Kim Flowers has learned more about the energy efficiency of appliances and systems, as she often explains rebates to co-op members. She has added insulation into her home.

“Before working in this industry, what I was interested in was all cosmetic, how the house looks,” Flowers said. “Now it’s about what it’s insulated with and what the bones are. How the house operates and the science behind how it operates is extremely important because it’s a place where you will live for a long time.”

She shares her knowledge with Power Moves rebate recipients. Sometimes she even helps members to complete missing information to move their applications in the process so they can be approved.

“If things need to be sought after or hunted down, then I do that,” she said. “I am part of a team that gives money away, and people love to get money. It makes everybody happy. It’s like delivering flowers.”