“The rebate came at a great time because we had just opened, and when you’re opening a new business, there are a lot of financial pressures.”

From when DESTIHL’s first location opened in 2007, Potts tasted success. As the microbrew craze ballooned in the U.S., DESTIHL experienced unparalleled growth that led to a second location in 2011 and a third in 2013. The brewery then began selling its Wild Sour Series in cans in September 2014; demand grew so quickly that the microbrewery expanded its sales to 30 states. 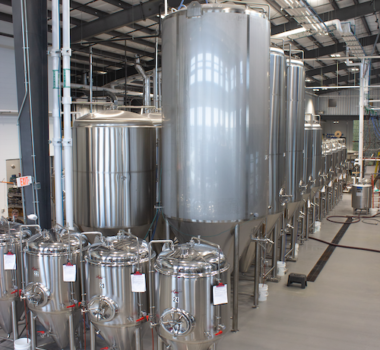 “We did a press release when the cans came out, which got a lot of recognition and the beers pretty much sold themselves,” Potts said. “The challenge then was meeting the demand.”

As demand grew, Potts realized that a new customized facility would best suit all of DESTIHL’s brewing needs. That was when he spotted the then-vacant location in Normal, Ill. It was near a commercial area, though undeveloped for the brewery to tailor to its needs. The town extended the roadway to get to the new location. Corn Belt Energy, the local electric cooperative that serves the site, installed new street lights. DESTIHL also collaborated with Corn Belt Energy and the rest of the Power Moves® team, which includes an engineer specializing in energy efficiency, on rebates for efficiency upgrades that save money on long-term energy costs.

“We want to be a positive influence for business, and be intentional about communicating with businesses at a time when we can have the strongest impact,” said Don Taylor, president and CEO of Corn Belt Energy. “We want business owners to benefit from the cooperative difference, and know that we and the community are invested in their success.”

DESTIHL’s upgrades include LEDs, which use less electricity and have a longer lifespan than incandescent lighting; and energy-saving variable frequency drives on motors used in the brewing and canning process. Energy efficient coolers and freezers also were installed. The Power Moves team awarded DESTIHL with a $25,000 rebate for the upgrades, which will save $20,000 in annual energy costs. 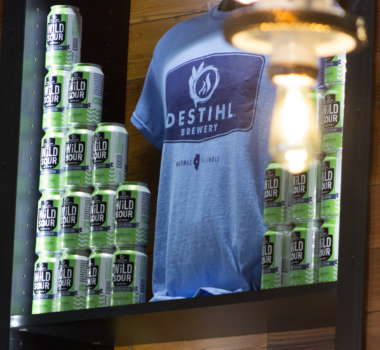 “Corn Belt was very supportive of the project, and they were very helpful with everything,” Potts said. “The rebate came at a great time because we had just opened, and when you’re opening a new business, there are a lot of financial pressures.”

Potts continues to keep his eyes on the future and opportunities for growth. The new location on a major interstate also lends itself well to the brewery’s growing popularity. And in early 2018, DESTIHL shipped beer to South Korea, DESTIHL’s first international market.

“There is a lot of opportunity for growth in this community,” Potts said. “Between that and Corn Belt being more reliable than what we are used to, it’s all pretty positive.”