He started in the family tradition when he was 6, feeding the chickens, hogs and cattle on the farm. He and his brother Dan bought out their dad to take over the family dairy in 1979, and today Floyd co-owns Plymouth, Ind.-based Homestead Dairy with his wife and sister-in-law. The business employs more than 40 people, including multiple generations of Houin’s relatives.

To preserve the family tradition, Houin has consistently planned for the future. This spring, the business opened a new $15 million, 381,000 square-foot dairy expansion featuring 24 robotic stalls that automate every step of the milking process – a new technology for the dairy on a scale not previously seen.

“It’s a marker for what can be done in the dairy business,” said Mark Batman, CEO of Marshall County REMC, which supplies electricity to Homestead Dairy. “They’re attracting a lot of attention.”

The robotic stalls uniquely identify, wash and milk the cows, and the stalls’ computers measure and record the milk each cow provides daily. The cows learn to visit a stall each time they want to be milked, resulting in a more natural environment that improves the milk yield. 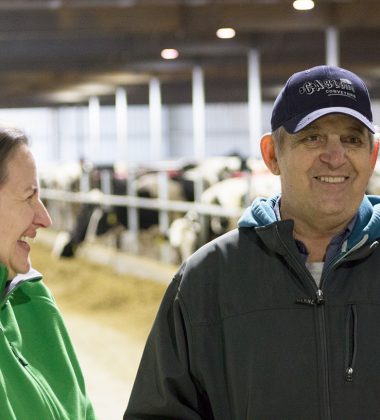 “With a robotic system, you spend a little more up front for equipment, but the total labor cost will be less over the lifetime of the operation,” Houin said of the automated technology, which frees up workers to focus on other areas of the dairy. “Cows also perform better in the robot environment.”

The expansion is the largest robot dairy in the United States, said Mike Schutz, professor of animal sciences at Purdue University. The robotic stalls have been used on smaller farms, and robot dairies exist on a smaller scale, said Schutz, who added that the industry is trending toward greater automation.

“There’s an awful lot of interest in managing the risk of a shrinking labor supply, so of course that means that farmers will be moving steadily away from conventional parlors,” said Schutz, who also had a class of students visit the dairy. “If this is shown that it can be worked on a large scale like Homestead is trying, then it becomes a lot more palatable to people.”

Houin collaborated with Marshall County REMC on upgrades through POWER MOVES®, an energy efficiency program offered by the electricity co-op. Homestead Dairy received $125,000 in rebates for efficiency upgrades that include LED lighting, which is more robust and has longer service life than traditional light bulbs, and variable frequency drives installed on fans to ensure proper airflow without wasting energy.

A cow at Homestead Dairy is massaged by a brush. The dairy incorporates several technologies to improve the cows’ quality of life.

Marshall County REMC officials also collaborated with Houin and Jerry Chavez, president and CEO of Marshall Co. Economic Development Corp., to secure tax abatements, which phase in taxes over time, to support the expansion. About half of the new taxes were abated, Chavez said.

“If you want to stay in business long-term, you need to keep your costs low,” Houin said. “The tax abatements are going to help reduce costs, especially in the initial start-up phase.”

Homestead Dairy is expected to hire at least 10 new employees as a result of growth from the expansion, which Houin also expects will enable “more family members to come back into the business.”

“We’ve got junior partners, and I have grandchildren who may be interested in coming back,” Houin added. “Hopefully this expansion will help keep the farm in the family for a lot longer.”