A Central Indiana school district tested by faltering chillers at a middle school answered with an upgrade earning high marks from the school’s electric cooperative: a $25,000 energy efficiency rebate.

Zionsville Community Schools (ZCS) received the Power Moves® rebate from Boone REMC, its local electric co-op, for upgrading to more energy efficient chillers when replacing the school’s three previous chillers in April 2021. The Zionsville West Middle School chillers had been in need of frequent repairs in recent years. The new chillers use significantly less energy than the previous equipment the school had been operating on since opening in 2007.

“The building operates not just during the school year, but it houses many of our summer programs, and a lot of opportunities for the community,” said Rebecca Coffman, assistant superintendent of operations for Zionsville Community Schools. “We knew that it was a prudent decision to replace the three chillers.”

A voter-approved referendum provided the school district with the funding needed to address multiple issues, including the chiller replacements. ZCS Energy Auditor Ryan Dickson worked closely with Boone REMC’s energy advisor on the chiller project and the rebate qualifications.

“The process was really easy, honestly,” Dickson said. “I personally did the application and waited until the project was complete, and then just submitted everything that I could.”

The chiller project is not the first time that Zionsville school employees worked with Boone REMC. The electric co-op’s energy advisor has toured all ZCS school buildings to offer advice to district employees regarding possible upgrades that could save energy and qualify for rebates. Boone REMC employees have also done school presentations about energy efficiency. 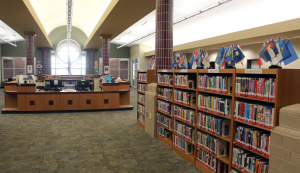 “We understand the important role that our schools play in the community, and we know that it’s vital that they are able to support children and families,” said Bill Conley, president and CEO of Boone REMC. “We are also aware of how invaluable financial resources are for schools, and we are happy to be a partner with our community schools to improve reliability while lowering costs.”

“It is fulfilling because at the end of the day, it’s for the students that we serve,” Dickson said. “The more efficient that we can be as a school system and the more money we save goes back into our schools and provides resources for teachers to be able to best support students.”