As The Barn III theater crew members repainted sets, they noticed things didn’t look as expected – because of a new lighting system illuminating the stage brighter than before.

The Barn II had been a dinner theater for 40 years before a violent thunderstorm and tornado destroyed it in 2015. When the site reopened in early 2019 as The Barn III, it featured multiple upgrades, including a customized LED theatrical lighting system that more brightly illuminated the stage while using 97.5 percent less electricity than the previous system. New owner Abby Reel and her partner Mary Simon, the previous owner of The Barn II, worked with Corn Belt Energy, the facility’s electric cooperative, to apply for Power Moves® rebates to help fund the energy efficiency upgrades.

“We used to have to use bright colors because the previous lighting in The Barn II was not as strong. We painted our first set for the new play four times because of the new lighting system,” said Simon, who had taken over as owner of The Barn II dinner theater in 1995 and now serves as managing director of The Barn III. “I’ve had a personal relationship with everyone at the co-op. Corn Belt has always been terrific.” 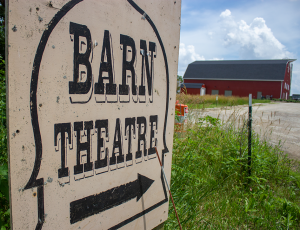 “From a budget perspective, that was one huge advantage to the new facility,” Reel added. “I’m thrilled.”

Reel first worked at The Barn II as a high school freshman busing tables before eventually joining the Conklin Players, the acting group producing plays at the venue. Through the years she and her husband continued occasionally working at The Barn II; Reel’s husband had worked the weekend before the storm and tornado destroyed the theater. 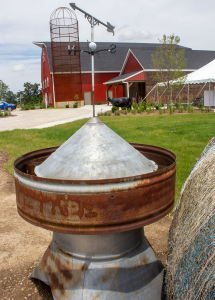 After the storm, Simon continued to offer dinner theater at another location until high costs brought it to an end in 2017. That’s when Reel, who owned a side business creating custom linens for weddings, approached Simon with the idea of a joint theater and wedding venue. The process wasn’t easy, but Reel secured a Small Business Administration loan and the duo fundraised $80,000 for the downpayment on the property.

“Abby and Mary have worked tirelessly to restore a longtime Central Illinois gem,” said Jeremy Myers, energy advisor for Corn Belt Energy. “It is always great when we can work with business owners to help them accomplish their goals. This project was a terrific bonus by bringing back a local landmark with added offerings that will help people make even more great memories there.”

Sold-out crowds welcomed The Barn III’s first play – “Death by Golf,” which was playing when The Barn II was destroyed. Business quickly picked up for the venue, which hosted its first weddings in spring 2019 and quickly started booking more for 2020. The venue also hosted prom for one of the local high schools; within a matter of weeks, it had already booked three proms for the following year.

“That makes me happy thinking about the future of The Barn III,” Reel said. “I want to see dinner theater stay alive for years to come in Central Illinois, and I think this is one way to make it happen.”