In 2019, an Indiana metal parts manufacturer welcomed a group scouring their business in an audit – to help the company save money. 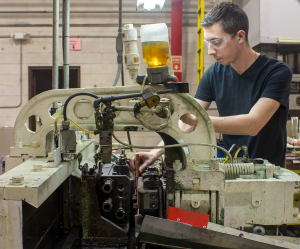 Metal Forming Industries received more than $6,000 in Power Moves® rebates from Parke County REMC, its electric cooperative, for upgrading to LED lighting in its Russellville, Ind., facility. The company also received a free commercial energy audit from Parke County REMC. The audit, in partnership with Purdue University, included a review of the facility and analysis of the structure’s energy use to create an action list for the company to reduce long-term energy use and save money.

“The audit just reinforced what we needed to do,” said Diane Fordice, plant manager for Metal Forming Industries. “We put occupancy sensors in the production support areas, for instance. It was a lot of small things that had a big impact on our staff.”

The high bay LEDs installed in the production areas were much brighter than the lights that were replaced, Fordice said. Because of that, additional task lights that had been at each machine were removed.

“Literally before that, we had lights on every piece of equipment,” Fordice said. “There were just tons of light fixtures, so we were using more electricity. And the morale was much better once we started putting the LEDs in.”

Metal Forming Industries employees first started speaking with Parke County REMC employees about power concerns in 2014. They discussed the Power Moves program and the company received its first rebate in 2017. They have regularly met with the cooperative’s energy advisor who provided insight on projects that would qualify for the Power Moves rebates since then.

“It’s been great. It’s seamless for me,” Fordice said of working with Parke County REMC on the Power Moves rebates. “My job in that was very small. It’s great because I don’t have the time.”

“Metal Forming Industries is an internationally successful business that we are proud to serve,” said Chadd Jenkins, president and CEO of Parke County REMC. “They have been receptive to more efficiently and effectively using energy. We are committed to helping all of our members, including families and businesses, to be successful.”

“Anything comes up, we check with Parke County REMC, because anything we buy could affect what we do in terms of energy, and if there are any rebates available,” Fordice said. “It’s in our minds to call and talk with the REMC to see what would happen.”