A December 2016 blaze that nearly engulfed an insulation manufacturing plant in Missouri instead inspired improvements boosting employee morale and trimming energy costs – with help from the local electric co-op.

Citizens Electric Corp., the southeastern Missouri electric cooperative that powers the Atlas Molded Products plant in Perryville, partnered with the business on Power Moves® rebates for energy efficiency improvements. The fire had destroyed 85 percent of the plant; within days, the expanded polystyrene insulation company started planning to rebuild.

“We got two lines running in January 2017, which were crucial for us to keep a few customers, and we just started going from there,” said Sheila McGowan, accounting manager for Atlas Molded Products. “Every day we just had more and more tasks to do to get up and running.”

The unexpected opportunity to rebuild also gave business officials the chance to incorporate some improvements to the site. The plant’s production facilities had previously been six separate buildings constructed over time; the company built a single structure in their place.

“The pre-fire buildings were all small buildings. We replaced them with one large building, and in doing so everyone can easily see each other,” McGowan said. “It’s easier to communicate with each other.”

Atlas previously had worked with Citizens Electric Corp. on Power Moves rebates for energy efficiency upgrades. After the fire, the company collaborated with the electric co-op on LED lights and sensors for the new facility. The LEDs made the new facility significantly brighter than the previously buildings, McGowan said. Previous employees visiting the new site quickly noticed the difference, she said.

“It’s a morale booster,” McGowan added. “People want to come in and be in a bright, lit, well-cleaned area.”

Atlas received just over $45,000 in Power Moves rebates for projects that save 413,947 kilowatt-hours in energy each year. “It was nice to be able to know that we were going to get a little bit of return on money that we were spending at the time, when we were spending a tremendous amount of money just rebuilding,” McGowan said. 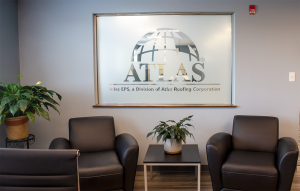 “Atlas has been a significant employer in our community, and showed that commitment in how resilient they were to rebuild knowing how catastrophic the damage was to the plant,” Robinson said. “We are pleased that they remained and rebuilt in the community, and we are thrilled to have contributed to their success.”

“I would encourage anyone to take advantage of the program,” McGowan said of Power Moves. “Everyone was great to work with and answered any questions we had. We would do it in a heartbeat in the future.”